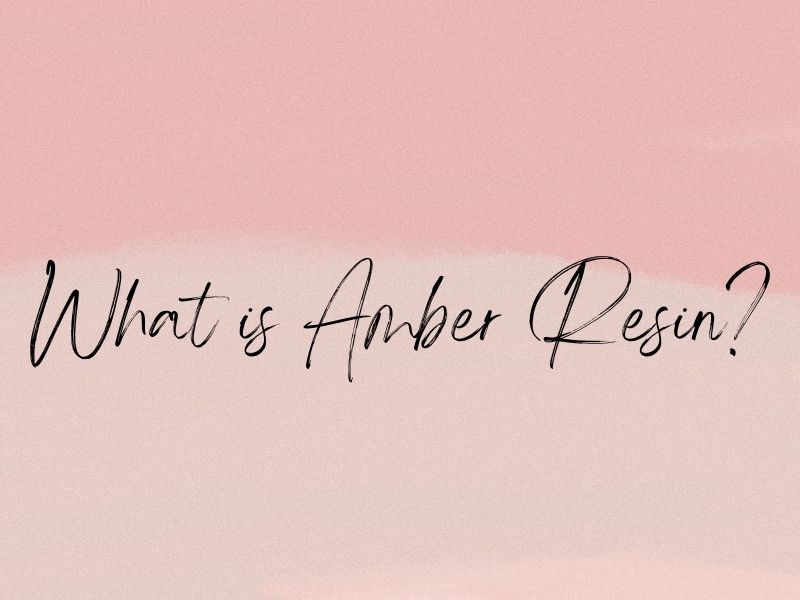 In this article, I am going to tell you what amber resin is, how amber resin is formed, where amber resin comes from and why is it so expensive. I will also discuss the difference between real amber and fake amber so that you can tell them apart easily.

When it comes to the term amber resin, most people immediately think of burning. However, the basic definition of amber refers to hardened tree sap that’s used for multiple purposes. But what exactly is amber resin and what makes it unique?

While amber resin has been used for its medicinal properties for thousands of years, modern research is only just beginning to uncover the true benefits of the mineral. Though still largely unproven, it’s thought that amber can be used to relieve pain, reduce inflammation and soothe skin irritations. However, its popularity as a natural remedy remains strong thanks to anecdotal evidence from its many fans.

The active ingredient in amber resin is succinic acid—a mild pain reliever and anti-inflammatory. These properties make it useful in treating arthritis and other joint pains, as well as injuries. Amber resin is often used to treat children with teething pain, as well as when they’re experiencing earaches or even flu symptoms.

However, there aren’t many scientific studies on amber resin as a medicine, so you should be cautious when using it for health purposes. How much relief you’ll get from it will depend on the type of amber you use, how you use it, and your own individual responses to the treatment.

What is amber incense used for?

Amber incense can be used for many purposes. It can help with meditation and relaxation, it can be used to purify the air (when burned), it can help with insomnia and other sleeping problems, and it may even be beneficial for those suffering from chronic pain or depression.

The most popular use of amber incense is in meditation. Burning any type of incense while meditating is said to help with concentration, balance chakras, cleanse the mind and body, and create an atmosphere conducive to meditation.

How do you burn amber resin incense?

Wash your hands thoroughly before handling amber resin incense to ensure that no dirt or debris gets onto the incense. This can affect how well it burns and make it hard for it to burn evenly.

Place your charcoal disk on a heat-resistant surface, such as a metal tray or a stone tabletop. Once you have placed the charcoal disk on the surface, light it with a lighter or match. The charcoal will glow red and then begin to turn white when the center has become hot enough to begin burning the resin.

Place pieces of amber resin onto the center of your charcoal disk while it is still glowing red.

Does amber really have healing properties?

Amber has been used as a healing substance for thousands of years. It was first used by ancient Egyptians, who believed that an amber bead found in the eye of a snake represented its ability to heal.

Amber is still thought to have healing properties in many different cultures today. In some cases, it is used to treat specific diseases or illnesses, while other cultures believe that it can improve general health and well-being.

The healing properties of amber include:

Antibacterial – Amber can kill bacteria on contact and prevent infections from occurring on open wounds or cuts. It can be used as an effective antiseptic when applied directly to the skin or taken internally in liquid form by mouth or through an enema (an injection into the rectum).

Antioxidant – Amber contains antioxidants called anthocyanins which help reduce free radical damage to cells and tissues in the body. This helps prevent cell damage and premature aging of skin cells, as well as slowing down the aging process overall by protecting against heart disease, cancer, and other degenerative conditions such as Alzheimer’s disease and Parkinson’s disease.

Amber resin has a sweet, earthy scent similar to pine needles or sap. It also has a mild woody aroma that’s reminiscent of incense or wood shavings.

Amber is a gemstone that brings good luck when worn close to the body, such as on your neck or in a pocket. It also brings good luck when placed near things that need healing or protection, such as plants or animals. A piece of amber can be kept in a car to protect it from lightning strikes and other storms.

What is Moroccan amber made of?

Moroccan amber is the most famous in the world. The largest and most valuable pieces of amber are found at this site. It is estimated that between 100 and 250 million years ago, the Mediterranean coast of Africa was covered by a sea with warm tropical waters that were rich in organic matter. This organic matter settled to the bottom and was covered by layers of sand, silt, and clay.

Over millions of years these sediments became compressed into shale which protected the organic matter from oxidation (degradation by oxygen).

As this shale was lifted up out of the sea during geological uplifting it was exposed to heat from sunlight and this caused it to release its trapped gases which formed bubbles inside the rock matrix. These bubbles were then filled with resin which solidified over thousands of years into amber.

How do you burn honey with amber?

1) Place a small amount of dried or fresh flowers, herbs, or resins in a heat-proof dish (glass or metal).

2) Add a small amount of honey or succulent sap from a tree. The sap should be fresh and not dried out.

3) Light the mixture on fire and allow it to burn until it goes out on its own.

4) When the fire is out, let everything cool down completely before removing any ash residue that may remain in your dish or container.

What is amber incense used for spiritually?

Amber is a fossilized resin from trees that grew in the mountains of the Baltic region during the Eocene epoch, about 40 million years ago. Amber has been used as incense since ancient times and was once considered an essential part of religious ceremonies.

Today, amber incense is still used by many cultures around the world to help heal physical ailments and create an atmosphere of spiritual well-being. The sweet scent of amber is said to be calming and cleansing, which makes it an excellent choice for meditation or prayer sessions. Its sweet aroma also helps enhance concentration during study sessions or other activities that require focus and attention.

Amber incense can be burned on charcoal tablets or cones, which are available at many metaphysical shops or online retailers. There are several different types of amber incense available; however, all types share similar properties:

Calming effect on both mind and body

What is an amber essential oil used for?

Amber essential oil is used to treat a number of different ailments, including depression and anxiety.

Amber essential oil has a woodsy aroma that’s similar to sandalwood. It’s extracted from the resin of various species of tree such as pine, fir, spruce, and cedar.

Amber essential oil has been used in perfumes for centuries because it’s known for its sensual fragrance. It’s also been used to treat several health conditions due to its therapeutic properties.

The benefits of the amber essential oil include:

Helping with depression and anxiety

How can I tell real amber from fake?